In researching this post, I was hard put to find many articles on the life and career of Jimmy Conlin. Despite the fact that he’s appeared in well over 100 films there is precious little information on this Classic Hollywood stalwart. So I think it’s high time we praise this unsung hero of the golden age of Hollywood.

Myrtle Glass and Jimmy as Conlin and Glass

Jimmy Conlin was born James Patrick Conlin in Camden, New Jersey on October 14th, 1884. Jimmy was one of nine children. Pater Conlin kept a roof over his family’s head by operating a business as a shoemaker along with Jimmy’s older brother John. Jimmy’s father wanted him to be a concert pianist so he sent him to study at the Philadelphia Conservatory of Music. Unfortunately, when the family business failed, the piano lessons stopped. However, Jimmy managed to make what piano lessons he did have pay by creating a song and dance act with his first wife Lillian Steel and traveling the Keith-Albee-Orpheum Vaudeville circuit. Later, when his marriage to Lillian ran aground, they divorced and he married his second wife Myrtle Glass. Jimmy then formed an act with Myrtle and they traveled the circuit, billed as Conlin and Glass.

Conlin’s first film experience came when he and his wife performed their Vaudeville act for a Vitaphone short titled “Sharps and Flats” (1928). This was followed by another short for Vitaphone with Conlin and Glass, “Zip! Boom! Bang!” (1929). Jimmy then made a comedy short solo in 1930 entitled “A Tight Squeeze”. His film career didn’t really take off until 1933 but when it did it didn’t let up until 1959. From 1933 to 1959 with the exception of 1951 he appeared in at least one film a year. At the height of his demand, he would often appear in more than a dozen films in a single year. These were mostly small parts for which he was often left uncredited. 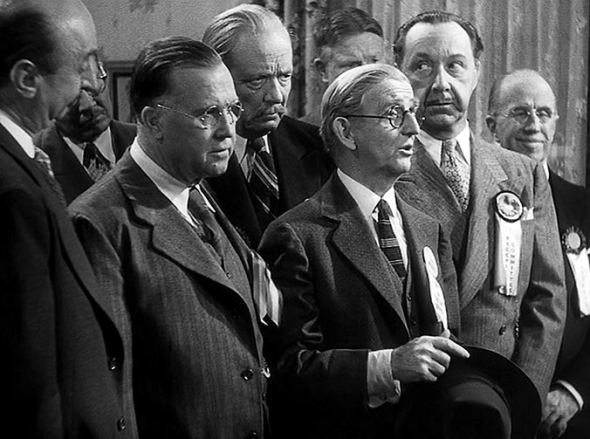 Conlin was a very slight man, thin and short, bespectacled with a weak jaw and a crazy mop of hair. With this appearance he often played bartenders or criminal elements. Rarely did he play a person of any authority. In the 1940’s, Conlin became a member of Preston Sturges’ unofficial stock company of character actors. Sturges liked Conlin’s work and often gave him sizable roles, casting him against his usual type. Sturges and Conlin became fast friends during this time and when Sturges’ fortunes fell later in life, Conlin kept in touch, helping out in any way that he could. 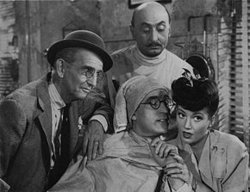 with Harold Lloyd in “The Sin of Harold Diddlebock” (1946)

Notable films for Conlin include the Sturges helmers “Sullivan’s Travels” (1941) as the experienced inmate who shows compassion for Sullivan when he winds up on the chain gang, “The Palm Beach Story” (1942) as a member of the Quail and Ale club, “Hail the Conquering Hero” (1944) as Judge Dennis who attempts to convince Woodrow to run for mayor, and “The Sin of Harold Diddlebock” (1947) as Wormy, the ne’er-do-well who introduces Harold to strong drink, resulting in the madcap antics which follow.

Conlin made his final film appearance in 1959 when he played an elderly, habitual criminal in “Anatomy of a Murder”. When television came around in the 50’s Conlin joined the bandwagon but only in a limited way. He had a recurring role as Charley the bartender on “Duffy’s Tavern”, a syndicated series from 1954. 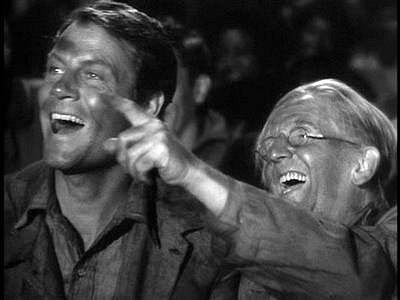 One thought on “Know Your Character Actor – Jimmy Conlin”