Joseph Schildkraut was born in Vienna, Austria on March 22nd, 1896, the son of Erna and Rudolph Schildkraut. Rudolph was a famous stage and film actor appearing as one of the most important players in the Max Reinhardt acting company of Berlin. At a young age, Joseph was nicknamed Pepi and this affectionate moniker stuck with him his entire life. Being the son of a famous actor, Joseph got an early start on the stage, appearing with his father when he was just a boy, but Erna and Rudolph had other ideas for their son than acting. Joseph’s parents wanted him to be a concert pianist so they enrolled him in the Imperial Academy of Music in Berlin where he studied piano and violin. 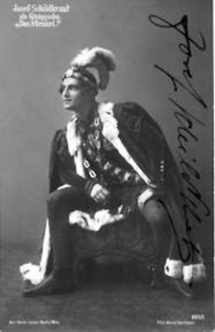 Joseph on the German Stage circa 1918

Following Joseph’s graduation from the Academy in 1911, the family emigrated to America in 1912, settling in New York where father Rudolph appeared in the Yiddish theater which was thriving in New York at the time. Though his parents had wanted him to be a musician, Joseph demonstrated a desire to follow in his father’s footsteps and so the family enrolled him in the American Academy of Dramatic Arts where two of his classmates were Paul Muni and William Powell. He graduated from the Academy in 1913 and, shortly after, the family returned to Germany when his father was offered a lucrative contact with the Max Reinhardt acting company. While his father played Shylock in “The Merchant of Venice” for Reinhardt, Joseph set about making a name for himself on the German stage with the coaching of character actor Albert Basserman. Joseph’s formal stage debut would be in Max Reinhardt’s production of “The Prodigal Son” in 1913.

Joseph as Liliom on Broadway

Shortly after, Joseph began making appearances in silent films beginning with “Shlemihl” (1915), a film in which his father also appeared.  This was followed by appearances in “Das Wiegenlied” (1915) and “Schweigepflicht” (1916). It was at this time, that Joseph’s acting career was interrupted by World War I. Joseph was able to avoid serving in the conflict by relying on his theatrical connections but the war put a temporary end to his acting. Once the war was over, stage work was no easier to find in Germany so his father chose to move the family back to New York in 1920. Now an established performer in Germany, Joseph was able to find work on Broadway. In 1921, he played the title role in Ferenc Molnar’s “Liliom”, the play that later became the basis for Rodgers and Hammerstein’s “Carousel”, playing opposite Eva Le Gallienne. This play made stars of both Joseph and Eva and many years later they would reprise their roles for the 1932 Broadway revival.

Having a big success on Broadway, it wasn’t long before Hollywood began calling, and Joseph’s first American film role was for no less a personage than D.W. Griffith when he appeared in Griffith’s “Orphans of the Storm” (1921), starring Lillian and Dorothy Gish. His appearance as the courageous, romantic hero Chevalier de Vaudray set a precedent that would be repeated in a string of silent films. In mid-20’s Hollywood, with his dashing good looks and elegant bearing, Joseph filled the casting director’s call for the suave, debonair foreigner, not unlike that of Rudolph Valentino or Ramon Navarro. A string of films teaming him with a bevy of attractive leading ladies followed. 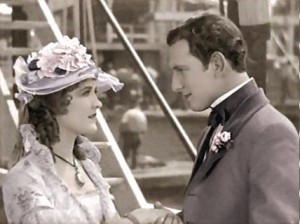 “The Song of Love” (1923) paired Joseph with Norma Talmadge as a dancing girl fighting to protect the French agent, played by Joseph, whom she loves. In the Cecil B. DeMille production, “The Road to Yesterday” (1925), Joseph and Jetta Goudal play a married couple who are tormented by the tragedy that had befallen them in their past lives. In “Shipwrecked” (1926), Seena Owen is a fugitive who stows away on a ship and Joseph is the ship’s cook who befriends her. That same year, in “Meet the Prince” (1926), Joseph is a bankrupt Russian prince who comes to America to escape the revolution back home and marry a rich American but instead falls in love with poor girl Marguerite De La Motte who is likewise looking to marry for money. Joseph’s introduction to sound came when he appeared as Gaylord Ravenal in a non-singing version of “Show Boat” (1929) with Laura La Plante as Magnolia. This was one of those films that appeared during the transition to sound and as such was mostly silent but featured several sequences with synchronized dialog. 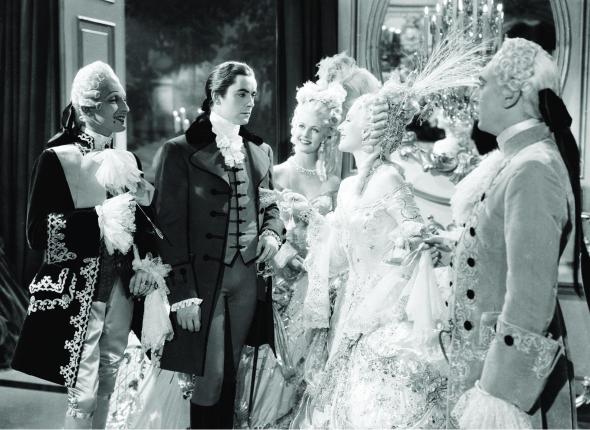 But not all of Joseph’s roles at this time were as leading men. In 1927, he appeared in Cecil B. DeMille’s “The King of Kings”, a film in which his father also had a role as Jewish high priest Caiaphas. Instead of the protagonist, Jesus, Joseph here plays Judas Iscariot, the clear villain of the piece. This role was a precursor to the sorts of roles he would be asked to play time and time again during the 30’s and 40’s when he made the transition from a leading man to a distinctive, chameleon-like, character actor. More often than not during the 30’s, Joseph would take on the part of a smooth, cunning, villain.

In “Viva Villa!” (1934), starring Wallace Beery as the Mexican rebel leader, Joseph played the arrogant General Pascal whom Pancho Villa sentences to death by throwing him into a pit of stinging ants. Also in 1934, Joseph appeared in “Cleopatra” as King Herod, with Claudette Colbert as the eponymous queen and Warren William as her lover Julius Caesar. Joseph won the Academy Award for Best Supporting Actor when he bucked this villainous trend and played Alfred Dreyfus in “The Life of Emile Zola” (1937) starring Paul Muni. For his portrayal of a proud French Jew falsely convicted of treason and condemned to Devil’s Island, Joseph became the first foreign born actor to win an Oscar. The following year, he was back to type when he portrayed the ambitious and treacherous Duc d’Orléans in the epic “Marie Antoinette” (1938) starring Norma Shearer. 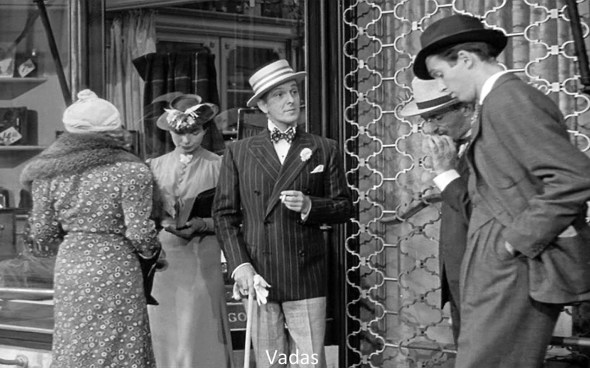 In 1940, Joseph appeared in my favorite performance of his as the oily Mr. Vadas in Ernst Lubitsch’s “The Shop Around the Corner” starring Jimmy Stewart and Margaret Sullavan. Joseph’s appearances in films slowed somewhat in the 40’s but he continued to appear in Broadway productions, notably in “Clash By Night” (1941) with Tallulah Bankhead and “Uncle Harry” (1942), and “The Cherry Orchard” (1944) both also starring his leading lady from his first Broadway success, Eva Le Gallienne. Broadway would also supply Joseph the role for which he is most remembered today when in 1955 he portrayed Otto Frank in the original stage production of “The Diary of Anne Frank”. He would reprise this role for the film version in 1959. 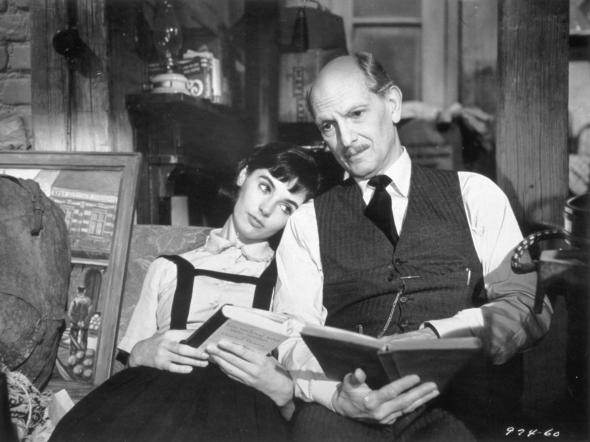 Millie Perkins and Joseph in “The Diary of Anne Frank” (1959)

The advent of television in the 50’s meant another venue for Joseph’s prodigious talents and he, like many Hollywood character actors of the time, began to appear in numerous roles on the small screen, including a notable performance as Claudius in the 1953 Hall of Fame presentation of “Hamlet”. Joseph even had his own short-lived series called “Joseph Schildkraut Presents” which appeared on the Dumont Television Network from October 1953 to January 1954. In 1963 he was nominated for a Best Actor Emmy for his guest appearance on NBC’s “Sam Benedict”, a legal drama starring Edmond O’Brien. Joseph gave two memorable performances on “The Twilight Zone” anthology series, first in “Death’s Head Revisited” (1961) as a victim of the concentration camp at Dachau who returns from the dead to confront the camp guard who tormented him, and then in “The Trade-Ins” (1962) as an old man who is given the chance to turn in his aging body for a young one but later gives up this new lease on life when he realizes it would separate him from his beloved elderly wife.

Joseph’s last film was another biblical epic, “The Greatest Story Ever Told” (1964), in which he played Nicodemus. Joseph worked right up until the last days of his life. He died at the age of 67 of a heart attack at his home in New York on January 21st, 1964. The following month he was to have started rehearsals for “Café Crown” which was scheduled to premiere on Broadway the following April. It would have been Joseph’s first musical.