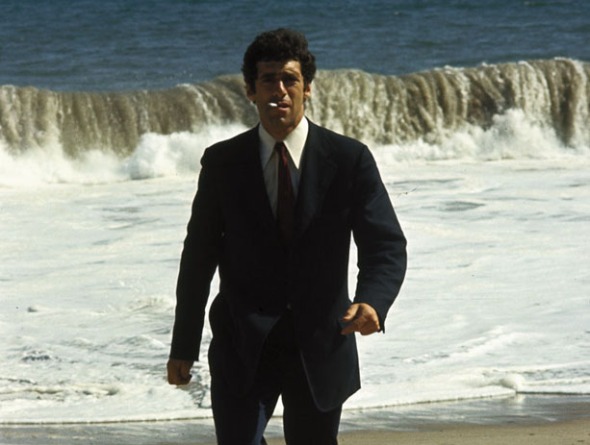 Elliott Gould, at first glance, would seem like an odd choice to portray legendary private eye Philip Marlowe. Certainly when “The Long Goodbye” was released in 1973 there was a lot of push back from hardcore Marlowe fans who considered the film a sacrilege. If your conception of Philip Marlowe is Humphrey Bogart in “The Big Sleep”, you’ll be disappointed too. But director Robert Altman had in mind a re-imagining of the classic noir for a modern era and Gould was just the man to put it over.

Based on Raymand Chandler’s 1953 novel of the same name, the script varies markedly from the book but still retains the basic structure of a Marlowe story: Marlowe gets involved in a case which is resolved fairly quickly but which leaves doubts in his mind and unanswered questions which cause him to dig deeper, revealing a labyrinthine plot and eventually the whole truth. Here Philip Marlowe (Elliott Gould) is visited by longtime friend Terry Lennox (Jim Bouton) who has had some trouble at home, evidenced by the scratches on his face. Terry asks Marlowe to drive him to the Mexican border near Tijuana which Marlowe does. On returning home, Marlowe is set upon by a couple of LA’s finest who tell him that they are looking for Terry for the murder of his wife Sylvia. They know Terry’s car is in Marlowe’s driveway and conclude that Marlowe must know something of Terry’s whereabouts. Marlowe refuses to help and they throw him in jail on suspicion of being an accessory to murder. After three days of cooling his heels in the pokey he is suddenly released and told that Terry has killed himself in Mexico leaving a suicide note in which he confesses to the murder of his wife. Marlowe is still not convinced that Terry killed his wife and resolves to discover the truth about Sylvia’s murder. 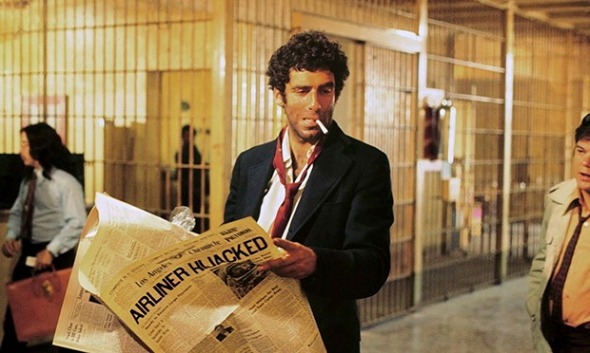 Eileen Wade (Nina van Pallandt) reads the reports of the murder and Marlowe’s refusal to turn on his friend and decides that this private eye may just be the one to help her find her missing husband. Roger Wade (Sterling Hayden), an alcoholic, Hemingway-like author suffering from writer’s block, has been missing for the past week and Eileen is understandably worried. Eileen fits the mold for a femme fatale, nicely: blonde and beautiful. This is the 70’s so she’s not wearing a leggy evening dress but 20 years earlier you can bet she would have been. When Marlowe arrives at Eileen’s beach house he discovers that it’s part of the same Malibu community to which Terry and Sylvia belonged. Coincidence? 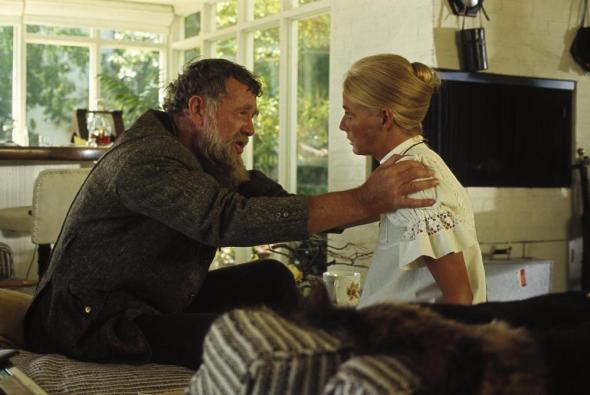 Further events only serve to complicate the plot and distract Marlowe from his goal of proving his friend’s innocence. Marlowe quickly finds Roger Wade in a rehab clinic where he was drying out, but then he is visited by gangster Marty Augustine (director Mark Rydell) and his thugs. Marty gave Terry a suitcase of money that he was supposed to deliver to him in Mexico and Marty is convinced that Marlowe knows the whereabouts of this money. Marty takes the loss of the money very seriously which he demonstrates to Marlowe by breaking a Coke bottle across his girlfriend’s face. “That’s someone I love. You, I don’t even like,” he tells Marlowe. 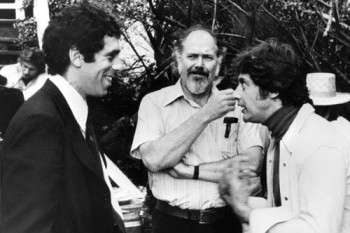 Robert Altman would seem to be the obvious choice to helm a 70’s update to the classic film noir. In the early 70’s, he made a number of genre busting films starting with “M.A.S.H” (1970) (war movie) and then “McCabe & Mrs. Miller” (1971) (Western). But he was not the first choice of the producers. The film was first offered to Howard Hawks and Peter Bogdonavitch but both turned it down. When the producers approached Altman, he agreed to direct but only if he could cast Gould as Marlowe. This was certainly a departure from the original vision of the producers whose first choices were Robert Mitchum or Lee Marvin and casting Gould was a bit of a risk at the time. After the rumors of drug use on the set of the ill-fated “A Glimpse of Tiger”, Gould had been unofficially blackballed in Hollywood and hadn’t worked for two years. Fortunately, the producers agreed to Altman’s request to cast Gould as the lead. Without Gould this would have been a very different picture.

With Gould, Altman has created a classic Marlowe but dropped him into a modern world. The city that Marlowe inhabits is clearly, what was, at the time, modern LA, complete with topless Yoga practitioners, hash brownies, rehab clinics, and sun-drenched beaches. But Marlowe is the same man from the period in which the novel was based, 1953. In a nice touch, the film opens with Marlowe waking up in his bed as if he has been sleeping for the past 20 years. Altman even referred to the character as Rip Van Marlowe. Marlowe is an anachronism in this world. He constantly wears his dark suit and white shirt. He even puts on his tie to go to the supermarket at three in the morning. In the health conscious 70’s, Marlowe is conspicuous for constantly smoking, often using the butt of his last cigarette to light his next. He even drives a 1948 Lincoln Continental. 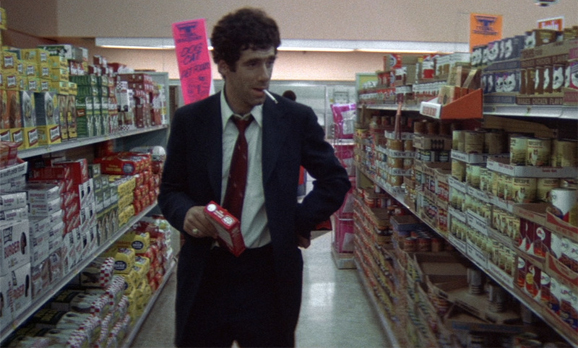 But these are all outward appearances. What counts is the inner man and here too he is a direct throwback to the Marlowe of the 40’s and 50’s. Marlowe has old fashioned values, principal among these being loyalty. The film spends a lot of time in the opening sequence to show this in Marlowe’s treatment of his cat. The cat wakes him at three in the morning because he’s hungry. Marlowe doesn’t have any of the cat’s favorite cat food at hand and the cat refuses to eat whatever else Marlowe is able to find for him. Loyal to his cat, Marlowe runs out to the 24 hour mini-mart to find the right food but even they are out. Marlowe then buys another brand and surreptitiously places this food in the old can and offers this to the cat. But you can’t fool a cat and he turns up his nose at this offering and runs out of the apartment. It’s this same loyalty that carries over to his belief in Terry’s innocence.

Marlowe visits Mexico to investigate Terry’s death but doesn’t find anything to go on. The local officials only show him photos of Terry’s dead body. He returns to the Wade’s to ask them about a possible connection to Terry and Sylvia. They’re having a party which is broken up when the director of the rehab clinic where Roger was staying arrives and demands payment for services rendered. Marlowe hangs back after all the guests have left and has dinner with Eileen while Roger is sleeping off another drunk. While they are clearing the dishes they see a drunken Roger wandering into the ocean. They race out to rescue him but before they can reach him he drowns in an apparent suicide. A distraught Eileen confesses to Marlowe that Roger and Sylvia were having an affair and she fears that he killed Sylvia. Marlowe takes this to the police but they dismiss him saying that Roger can prove he was at the clinic at the time of Sylvia’s death. With little else to go on, Marlowe visits Mexico a second time and bribes the officials into revealing the truth about Terry’s death.

With the added incentive of ready cash, they reveal that Terry faked his suicide and is alive and well in Mexico. Marlowe visits Terry at his villa where Terry admits to killing Sylvia. He was having an affair with Eileen and when Sylvia found out she threatened to go to the police and tell them that he was transporting money for Marty Augustine. Terry confesses that he used Marlowe and that he has no regrets.

With that, Marlowe shoots and kills Terry. As Marlowe is walking back to town from Terry’s villa he passes Eileen going the other way in a jeep.

I can see why fans of Chandler’s Marlowe were unhappy with Gould’s portrayal. Compared to Humphrey Bogart’s portrayal in “The Big Sleep” (1946) or even Dick Powell’s in “Murder, My Sweet” (1944) this is definitely a very different Marlowe. He’s got the same smart mouth as Bogie when dealing with the police or mobsters but he definitely doesn’t seem as tough. He’s not at any time threatening. Where Bogie acts, Gould reacts. But it is this judo-like ability to roll with the punches and come out standing which serves him well in this world. He accepts whatever is thrown at him with a shrug and a mumbled “It’s OK with me” which he repeats so many times throughout the film that you could base a drinking gaming on its repetition. This works well in a world in which we’ve come to realize that no matter how tough you are there’s always someone who’s tougher, someone like Marty who’s willing to smash a bottle across his girlfriend’s face to prove a point (a really shocking scene which reminds us that this is not our father’s film noir). After the assassinations of the 60’s and the Vietnam War, one has to admit that being tough is not enough to get you through. One needs a sense of balance to tiptoe through the minefields of life. Gould is a Marlowe for the 70’s. He retains that sense of decency, of loyalty; he’s still Marlowe, but he’s changed the way he deals with the corruption around him.