Every Sunday I go through the Turner Classic Movies listings for the next week (that’s about as far ahead as my cable box will allow) in search of those TCM gems that I have yet to watch or want to see again. (This is where my Set Your DVR monthly preview gets its name.) Invariably, I’ll end up choosing three or four films to record and watch during the week. No more! Or else I risk filling up the DVR which has to compete with normal fare like “Doctor Who”, “Legion”, and a dozen or so recordings of “Milo Murphy’s Law” that my daughter insists she will watch in the near future but hasn’t managed to get to in the past month. The life of a thirteen year old girl is very busy!

More often than not, the handful of films I choose for the next week will consist of films from the 30’s, which is my favorite decade of classic film and, if I’m lucky, will include what was referred to as a “programmer” in that decade. In the 30s, theaters would show a whole program of films, a top level film followed by a couple B movies with a newsreel and cartoons thrown in for good measure. A programmer was a film that could easily fit anywhere in this film program. It was good enough to appear at the top of a bill as a typical A movie but wouldn’t be out of place appearing lower on the bill after a studio prestige picture. A great example of this type of film is “Bureau of Missing Persons” (1933).

The film starts with a title card informing us that we’re about to see a film about real police work with stories ripped from today’s headlines.

All over the world thousands of persons disappear every day.
New York City alone reported over 27,000 missing last year. Why people drop from sight, where they go, and how they are found, is the problem of a special and little known department of the police – The Bureau of Missing Persons.
Many incidents in this picture are taken from actual cases in police records. 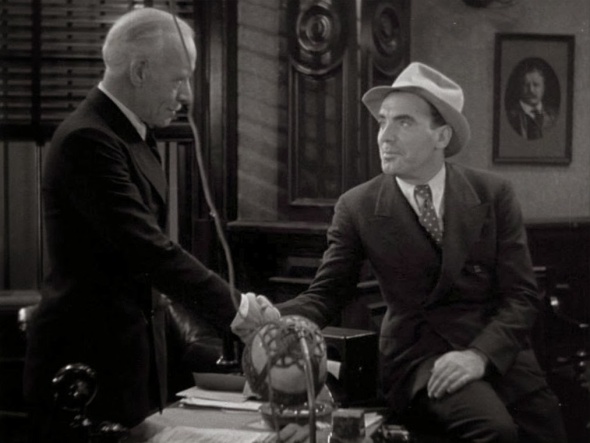 The story follows the exploits of Detective Butch Sanders (Pat O’Brien) who has just been demoted from the robbery division to the bureau of missing persons, headed by Captain Webb (Lewis Stone). Back in robbery, Saunders was used to letting his brawn do the heavy lifting, beating confessions out of suspects and the like, which was the main reason he was demoted. Webb tells Saunders that in missing persons, he’ll need to use more of his brain than his brawn. “Our business is to find people who for some reason or another have lost themselves. We restore them to their friends, their families, and their jobs. And that doesn’t require strong arm methods. That requires brains.” Saunders is doubtful of the efficacy of this approach but is willing to give it a try as he is teamed with Detective Joe Musik (Allen Jenkins) who shows him the ropes.

The cases come fast and furious at the bureau and Butch has to jump in with both feet. There’s the case of a philandering husband who has deserted his wife and children and is found living uptown with his mistress. Butch treats him as a criminal but Webb shows him another way which unites the husband with his family while saving the feelings of the innocent wife and children. Or the case of the boy prodigy, a fifteen year old violinist who disappears and is found living in a rooftop shack on Manhattan’s east side. He is supplied with food by the neighborhood boys who he cavorts with after dark. He just wanted to live the life of a normal boy for a change. Butch manages to bring the boy back with a minimum of fuss.

These cases show Butch that only half of the job is involved with finding the missing persons; the other half is involved in the social work of helping these people rejoin their lives and become happy, productive individuals. These cases are the training ground for Butch leading him to the main event, the case of a woman, Norma Roberts (Bette Davis), who comes looking for her missing husband. Butch takes one look at Norma’s baby blues and he determines he has to devote all his time to helping Norma comb the docks for her lost husband. The details of Norma’s story don’t add up but Butch is so blinded by Norma’s beauty that it takes him too long to discover the truth: that Norma is actually a fugitive from justice looking for the man she was supposed to have killed. Now Norma has disappeared and she becomes the missing person that Butch has got to find.

“Bureau of Missing Persons” is chock-a-block full of story. Besides those I’ve mentioned above, you’ve also got the case of the mother looking for her lost daughter, the elderly bachelor looking for his housekeeper, and the kidnapped son whose kidnappers rely on homing pigeons with thousand dollar bills tied to their feet to retrieve the ransom.

The film features quick plotting that moves from one case to the next using swish pans and quick wipes to cut from scene to scene. This film wastes no time on the niceties. It’s got a story to tell, actually five or six, and 72 minutes in which to do it. That running time is another reason I love programmers. Programmers, and more generally B movies, are almost always quite short. They’re made on tight budgets and the shorter the film, the cheaper the film. But I love that. In my book, brevity is the soul of wit. At between sixty to ninety minutes, you could fit two or three of these into the time it would take you to get through the latest three plus hour opus from Scorsese, and for my money it would be much more enjoyable.

The tight budget of a programmer also leads to another reason I love these films: character actors. A character actor is your utility infielder of studio films. They aren’t lead actors being groomed for stardom by the studio but they are being paid a weekly salary which they’ll get whether they work or not so the studio has an incentive to use them as much as possible. Character actor Guy Kibbee made eighteen films in 1932 alone and averaged ten films a year from 1932 to 1937 when he was contracted to Warner Brothers. The best of the bunch had certain characteristic mannerisms or ticks that would carry over from role to role so when you see them in a film you know what to expect. I find this comforting, like that friend of your parents that you saw every couple of months when you were a kid who used to amuse you by talking in rhyming couplets. (Or was that just me?)

“Bureau of Missing Persons” has five character actors that I’m familiar with and that’s a lot for a single film. Lewis Stone’s role as Captain Webb is typical of the calm, sagacious characters he usually played. He is best known today as Judge Hardy in the Andy Hardy film series which starred Mickey Rooney. Allen Jenkins as Detective Joe Musik is also playing to type in this film. Jenkins made a career out of playing dim-witted, loveable, tough guys whether they be cops, crooks, or your average Joe. Hugh Herbert also appears as one of the detectives but his role here is a departure from the flustered, comic characters that he normally played. Herbert was famous for waving his fingers together and talking to himself while interjecting “hoo hoo!”. Glenda Farrell plays Butch’s estranged wife, giving a performance that was typical of her work in the 30s, talking sass and cracking-wise at a mile a minute. Finally, Ruth Donnelly makes a showing as the bureau’s receptionist who has a little secret of her own. 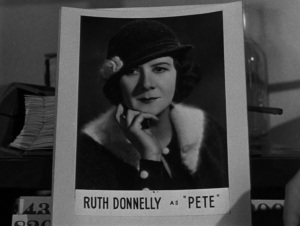 Warner Brothers in the 30s was known for introducing the actors in the opening of the film by showing a still or animated shot of the character with the actors name superimposed beneath. This is a great way to learn the names of character actors you’ve always recognized but couldn’t connect with a name. “Hey, it’s got that guy!” “Bureau of Missing Persons” does this as well with a hand reaching into a missing persons filing cabinet and pulling out eight by tens of the principal players. Interesting bit of trivia: when the film was originally released in 1933, Pat O’Brien’s still was the first you saw in the credits. In the reissue of 1936, top billing was given to Better Davis who by this time had become a big star at Warners.

“Bureau of Missing Persons” was the type of film that classic Hollywood created enmasse for an eager audience in the 30s and 40s when film was for most people what TV would become in the 50’s and every decade since, and when the double feature first became popular. The need to get a lot of product out quickly put limitations on the films that I think actually contributed to their quality. This resulted in a lot of what we would today consider short films. They got in, told a story, and got out, and they used a stock company of character actors to do it. That’s a plus in my book. I much prefer these small programmers to the larger prestige films of the time like “Marie Antoinette” (1938) or “The Life of Emile Zola” (1937). Sure there was a lot of dreck produced at the time but with the number of films coming out you were sure to hit on a good one eventually.