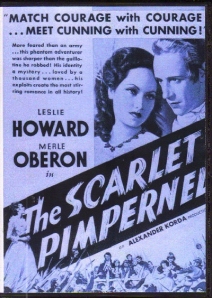 The classic tale of The Scarlet Pimpernel first came into existence as a short story by the Hungarian Baroness Emma Orczy which then became a play written by her and her husband in 1903 which she then novelized even before the play was published. The play became a huge success, running for four years and breaking many attendance records, which then drove the success of the novel. Since then there have been many adaptations in many media including a 1997 Broadway musical. This 1934 version, nearly 80 years old, is still considered to be one of the best and is a movie I simply love.

For those unfamiliar with the story of The Scarlet Pimpernel, it concerns a British Baronet, Sir Percy Blakeney (Leslie Howard), who, in addition to spending his time in the usual pursuits of the British aristocracy, fox hunting, pheasant shooting, takes trips across the channel to rescue members of the French aristocracy from the Revolution which has entered its Reign of Terror phase and whose proponents can’t seem to find enough noble heads to sever from their noble bodies. Percy commits these acts of heroism under his secret identity of The Scarlet Pimpernel using his mastery of disguise to keep this secret from all but his loyal comrades in arms. The French government, eager to uncover the true identity of the Pimpernel, has sent Citizen Chauvelin (Raymond Massey) to London as French ambassador. To throw suspicion off themselves, Percy and his cohorts choose to play the role of fops and fools so that no one would suspect that they would be capable of such bravery. Percy hasn’t even told his wife, Marguerite (Merle Oberon), of his secret identity. Percy feels he can’t trust his wife because she denounced the Marquis de St. Cyr to the Revolution which led to the death of the Marquis and his family. In her turn, Marguerite believes that the man she married and once loved has become a fool. The story of The Scarlet Pimpernel involves Percy’s thwarting of Chauvelin’s plot to undercover him and the rekindling of Percy and Marguerite’s love.

So there you have it. Pretty simple really. The Scarlet Pimpernel is the original hero with a secret identity, dare I say it, the original super-hero.  What makes this film really special, however, is Leslie Howard’s performance, watching him conceal his secret identity and build his foppish alter ego. Producer Alexander Korda had first considered Charles Laughton for the role of Percy since he previously had success with Laughton in “The Private Life of Henry VIII” the previous year. He cast Howard after fans of the novel reacted negatively to the idea of the less than debonair Laughton playing the suave Sir Percy. Thank God. Leslie Howard’s portrayal is spot on, understated and modern. This film made Leslie Howard a star and rightly so. The success of the film is owed in large part to Leslie Howard. 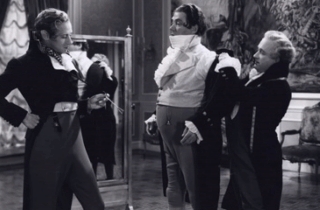 Percy’s metamorphosis from hero to zero is first seen when Sir Percy is advising his compatriots on their duties and what is expected of them. Speaking to his men he is all straight-faced and serious. “We must mask our identities, suffer the humiliation of being taken for fops, fools, nitwits, cowards,” he instructs them. As he’s speaking, Colonel Winterbottom walks in and in an instant, with a raise of his brow and a curl of his lip his face and attitude change completely. “Well, sink me if it isn’t Colonel Ramsbottom.” “Winterbottom!” he’s corrected. We see his foppish persona in more detail in a later scene where Percy is advising Prince George on his newly tailored coat. Percy has been called in because he is known for his taste in fashion. The coat is adequate but the cuff is declared a disaster and Percy advises the tailor, “Open up your sleeve, man. Let your ruffles take the air. Let them flow. Let them ripple, so when His Royal Highness takes snuff it’ll be… a swallow’s flight.” “Why, damn me, Percy, you’re brainless, spineless, useless. But you do know clothes!” the Prince declares. “Odd’s fish. That’s something. Isn’t it, sir?” Percy replies. It’s funny and that’s the point. This is an action movie but half the fun is in laughing at Sir Percy’s mannerisms. 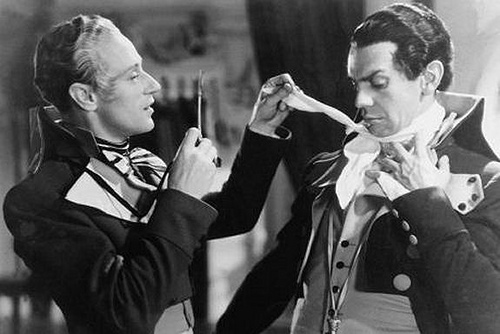 How’s this for action!

And that’s another thing. This is an action movie without any real action. No sword fighting, no fisticuffs, not a single buckle is swashed. The action is all cerebral. It’s a battle of wits between Chauvelin and Percy. The scenes between the two are especially enjoyable. Chauvelin will do anything to uncover the Pimpernel. Percy knows it but instead of avoiding Chauvelin he chooses to hide in plain sight. When Percy first meets Chauvelin, Chauvelin has just been urging Marguerite to help him in his search for the Pimpernel. Chauvelin holds evidence against Marguerite’s brother that will send him to the guillotine. Chauvelin promises to give this evidence to Marguerite if she can give him the name of the Pimpernel. Percy introduces himself to Chauvelin and can’t help giving Chavelin a malicious dig. “Devilish clever race, the French. You have the cleverest heads in the world. The trouble is, you all seem to go to pieces round the neck.” Chauvelin looks shocked, assuming this was a reference to the French national razor. Of course it was but Percy covers by referring to Chauvelin’s imperfectly tied cravat further building on his persona as a fop only concerned with trivialities. “Now look at that thing. Sink me, what a mess. If you really want to know how to tie a cravat I’ll tell you. But it isn’t easy, mind you. It takes all my brains.” “I’m sure it would,” Chauvelin replies. This sort of cat and mouse play, with Chauvelin as the mouse, is one of the joys of this film.

Another joy is watching the tragic love story of Percy and Marguerite unfold. Percy doesn’t trust his wife and Marguerite can’t understand how her husband has become a simpering fool. She mourns for the man he used to be. On top of all that she is unwittingly working with Chauvelin to ensure Percy’s downfall. There’s a scene early on that reveals the drama of this setup most beautifully. Marguerite’s brother Armand has just returned from France and is visiting Percy and Marguerite. In this scene, Percy is sarcastic with his wife, biting. It’s like watching someone kick a puppy. We get the feeling Percy hates his wife.

Later speaking alone with Armand we see how much she misses the man he used to be.

And that’s the crux of the love story. Can you feel the tragedy?! It’s too too tragic.

Finally, it’s a joy to watch Raymond Massey as Citizen Chauvelin. He has the cruel, self-assuredness of the zealot. He knows he’s right and he’ll do anything to achieve his goals. For much of the film we delight in seeing his angry reactions as he’s thwarted by the Pimpernel but Massey is at his best in the final scene at the Leon D’Or when he thinks he’s finally gotten the upper hand against his adversary. He’s just sent Percy out of the building to be executed by firing squad. He appears giddy as he mouths the words spoken by the captain of the squad, “Present… Aim… Fire!” and then his face erupts in a look of pure ecstasy. The look of shock when Percy appears a moment later quite unharmed is priceless. “I’m so sorry, Mr. Chauvelin. I had to come back for my hat. It’s such a cursed good hat, you know.”

This is a great film but alas the quality of the print that we have access to is less than optimal. Many scenes are dark, muddy, and blurry. The sound track often has a very noticeable hiss. This film is in desperate need of restoration. I’d love to see someone come out with a new, clean, 35mm print. On top of that, there are some copies of the film for sale that have a couple of key scenes missing. The first DVD I purchased from Amazon years back had the scene where Percy says he still loves his wife missing. That was a real tragedy. I now have another DVD copy that has the complete film. The running time on that one is 98 minutes while the bad one is 95 minutes so just be on your guard if you decide to purchase a DVD of this film.

The movie I posted about last, “Gold Diggers of 1933”, was not held in as great a regard as I had for it by the rest of my family. We are, however, in full agreement on “The Scarlet Pimpernel”. Even my ten year old daughter loves this film and so should you. Since this film appears to be public domain you can find the full movie on the web including on YouTube if you can’t wait for it to appear on TCM.