Franklin Pangborn got his start in acting on Broadway in the 1910’s. But it wasn’t until he began working in Hollywood in the late 20’s that he perfected his comic character making shorts for Mack Sennet, Hal Roach, and others. He graduated to feature films in the 30’s where his impeccable comic timing was in great demand.

The typical Pangborn character was one in which he had a modicum of authority but whose composure was constantly being tested by the antics of others. He was a master of the raised eyebrow or the withering stare and the slow build to a state of near hysterics. 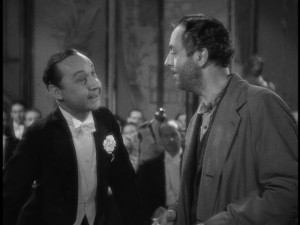 Pangborn with William Powell in
“My Man Godfrey”

Notable roles include those in a number of Preston Sturges comedies in the 40’s: the radio announcer in “Christmas in July”, Mr. Casalsis in “Sullivan’s Travels”, the apartment manager in “Palm Beach Story”, the welcoming committee chairman in “Hail the Conquering Hero”, Dr. Heywood in “The Great Moment”, and Formfit Franklin in “The Sin of Harold Diddlebock”. He also appeared in a series of W.C. Fields comedies, including “The Bank Dick” and “Never Give a Sucker an Even Break” where he played the producer, Mr. Pangborn.

Pangborn with W.C. Fields in “The Bank Dick”

Pangborn and Babe Ruth in “Perfect Control”, a short from 1932