“Gold Diggers of 1933” begins with a lively musical number not unlike those of other musicals of the 1930’s. Those viewers looking for a respite from the worries of the Great Depression are greeted by Ginger Rogers singing “We’re In the Money”. This being a Busby Berkeley number, she is draped in a garment made of coins and is accompanied by fifty or so other girls similarly dressed and holding plate sized coins in each hand. Fifty foot coins decorate the stage. After some typical Berkeley choreography, Ginger Rogers re-appears to sing the second verse in Pig Latin. As she sings “E’reway innay the oneymay” the camera dollies in to a close-up, putting her out of focus for a second and then regaining focus as we tighten in on her smiling face. She looks utterly insane. Why Pig Latin? I don’t know! This kind of craziness is just one of the reasons I love this movie.

This is just a rehearsal for a Broadway show, not the actual show, and it’s broken up by the sheriff who starts removing the sets and stripping the coins from the girls’ costumes. See, the gag is they’re singing about being in the money but in fact they’re behind on their payments and the show is being repossessed. No respite from the Great Depression provided in this film; this is a musical about the Great Depression. Apparently, this is not an unusual occurrence for these Broadway babies: “This is the fourth show in two months that I’ve been in of and out of.” “They close before they open.” “The Depression, dearie.”

This movie is ostensibly about how Barney (Ned Sparks) puts together a new show about the Great Depression. So this is a musical about the Great Depression about making a musical about the Great Depression. How meta! Barney’s got everything he needs for the show except the money. But luckily for us Brad (Dick Powell) the composer of the musical can scrape together the $15,000 needed for the show. You see Brad is actually a Boston blue-blood from a family of bankers and his brother Lawrence (Warren William) is none to happy with his involvement in the show and his interest in showgirl Polly (Ruby Keeler). Lawrence, with Fanuel J. Peabody (Guy Kibbee) tagging along, goes to see this Polly in order to buy her off but he instead runs into her roommates Carol (Joan Blondell) and Trixie (Aline MacMahon). He mistakenly assumes Carol is Polly and just for a laugh the girls don’t point out his mistake. Unable to buy off Polly/Carol, Lawrence decides he’ll try to get her to transfer her affections to him in order to save his brother while Trixie takes a liking to Fanuel who she calls Fanny. “The kind of man I’ve been looking for. Lots of money and no resistance.” 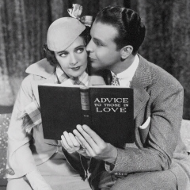 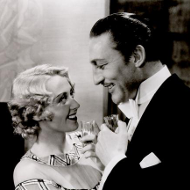 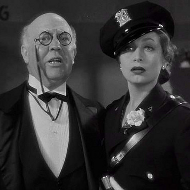 So there you have your trio of eponymous gold diggers with their prospective husbands. The rest of the movie is about how Lawrence reluctantly, and Fanny rather willingly, fall for their gold diggers and live happily ever after. But that’s just the story. What I love about this movie is ancillary to the story. Like the crazy Busby Berkeley numbers of which there are four. The first was the “We’re In the Money” number. Let’s a look at the second number which is easily the craziest: “Pettin’ in the Park”. Go ahead and watch it. I’ll wait.

I can understand if the beginning turns you off. Ruby Keeler is called on here to sing and dance neither of which she does particularly well. But once you get to the actual Busby Berkeley choreography it really takes off. I would like to point out a few things that I think are particularly noteworthy. The baby in the number is of course no baby at all but little person Billy Barty. He’s only nine years old at the making of this movie so he can, physically, very nearly pass for a baby but his demeanor is that of a little kid and that makes his appearance a little creepy. The roller skating service in the park “For Little Girls Who Have To Walk Home” is presumably for girls who have refused to put out and don’t get a ride back home with the men they’ve come with. Or am I being too cynical? The last part of the number is especially interesting with the women in their long, nearly see-through skirts, stockings, and garter belts. When the women appear in silhouette changing their wet clothes you can even clearly see one woman’s nipple. Proof that women in 1933 had nipples! 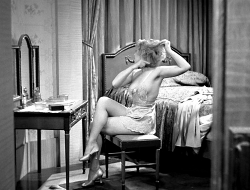 Darmatically justified brushing of the hair.

This movie is a great example of pre-code Hollywood, that short period between the adoption of the production code in 1930 and its enforcement in 1934. The production code was put into place to ensure that every movie was safe for the entire family. The pre-code era was a time when the movies could get away with a lot more and often tried. The “Pettin’ in the Park” number is really pushing the boundaries of what you could show of the female form. Another example of this is the scene where Lawrence and Fanny come to speak to who they think is Polly. Trixie is in the bath tub, we can’t see much of her, but then the camera pans over to Carol sitting in front of her mirror in a skimpy teddy brushing her hair. Movies of this period often showed young starlets in skimpy clothing to attract audiences. This movie is a little naughty and it reminds you that people back then were just as concerned with sex as people today. That’s something you tend to forget watching the films of the 40’s and 50’s with their twin beds with one foot on the floor at all times. Another reason I love this movie.

The second impressive Busby Berkeley number is the Forgotten Man number which ends the show. When Barney is talking about the number he describes it in these words, “The Depression, men marching, marching in the rain. Doughnuts and crullers, men marching, marching…jobs, jobs, and in the background, Carol, spirit of the Depression. A blue song. No, not a blue song but a wailing. A wailing. And this gorgeous woman singing this song that’ll tear their hearts out. The big parade. The big parade of tears!” Take a look:

This is my favorite number of the movie and it’s well worth the price of admission. Berkeley was inspired by the Bonus Army march of 1932 when World War I veterans marched on Washington to demand that the bonuses they were granted for service and which could not be redeemed until 1945 should be awarded immediately. Some veterans were shot dead when police were ordered to remove the protesters from government property.

The number plays out just like Barney said it would. There’s Carol, the spirit of the Great Depression. She isn’t so much wailing as talk-singing:

Remember my forgotten man
You put a rifle in his hand
You sent him far away
You shouted, “Hip-hooray!”
But look at him today

Spirit of the Depression

Then there’s plenty of marching: soldiers marching off to war to cheering crowds; soldiers marching at the front, fresh recruits going one way and the bedraggled wounded marching the other way; then men picking up soup and bread at a soup kitchen; men waiting their turn in line. I love this shot as it pans past the men in line showing those classic depression-era faces. They look so desperate and so young. I love that Berkeley picks up the detail of one man sharing his cigarette with another in line.

This number is how the movie ends. Normally a musical comedy like this would end with a big musical number but it would then cut back to the principals so we can see that the boy has found his girl and both are happy. This movie ends with Carol singing:

Cut to “The End”. Pretty strong stuff. Really strong if you’re actually living through the Great Depression. It’s a wonder there weren’t riots after that ending, considering the bonus marches were just the year before. You don’t normally see this kind of political message in a movie that is really just escapist entertainment. Another reason I love this movie.

Finally, what I love about this movie is Joan Blondell. She can’t sing or dance but she isn’t called on to do either, not really. In the forgotten man number she talk/sings her way through the beginning dramatic part. For the big finale you see her singing but it’s Etta Moten Barnett whose voice you hear. What really draws me to Joan Blondell from this era is she was just so damn cute. She has huge eyes, the biggest eyes of any actress I’ve ever seen. She’s like one of those Keane paintings of the kids with the big eyes but in a good, non-creepy way. And the Joan Blondell of 1933 was something of a sex symbol. You can have Jean Harlow. I much prefer Joan Blondell. She was much more natural. She was sassy, mischievous, a little naughty, as she demonstrates in those scenes opposite Warren William.

So that’s “Gold Diggers of 1933”. My wife and daughter think I’m crazy for liking this movie. It’s become a joke in our house. Whenever I want to rile them up I just mention this movie and they start to wail. I think they’ll come around in time.

Sorry, Guy. You won’t be seeing this again until the ’60s.