Glenda Farrell was born on June 30, 1901 in Enid, Oklahoma. Glenda claims her mother must have been a frustrated actress because after the family moved to Wichita, Kansas, she put Glenda on the stage at the age of seven, where she appeared as Eva in a production of Uncle Tom’s Cabin. Later, when the family moved to San Diego, Glenda continued her acting career, as a teen, when she joined the Virginia Brissac Stock Company. This is where Glenda really learned the craft of acting. Though a stock company, Glenda claims they worked just as hard as in a Broadway production, putting on a show every week, with directors that demanded the best from her. 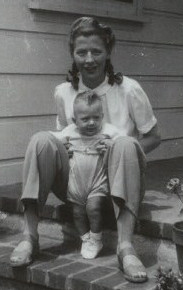 In 1920, Glenda met and wed Thomas Richards. To make a living at this time, Glenda and Richards put a Vaudeville act together and worked the circuit. The following year Glenda became pregnant with her son Tommy and this made it impossible to continue the act. The marriage turned rocky soon after that. Financial troubles caused Richards to drink and he would sometimes disappear for weeks on end. The two divorced in 1929.

In 1928, Glenda got a part in the play “The Spider”. When the production went East, Glenda went too, leaving little Tommy in the care of her mother. Soon after arriving on Broadway Glenda landed a role as Marion Hardy in “Skidding”, the play that would later provide the basis for the successful Andy Hardy film series. At this point, she started to achieve real success as an actress, appearing on Broadway in “Divided Honors” and the Preston Sturges penned “Recapture”. Though finding success on Broadway, Glenda yearned to make a splash in Hollywood. She finally got her chance in 1931 when she was cast as Olga, the girlfriend of Douglas Fairbanks, Jr.’s character in “Little Caesar”. Unfortunately, this role didn’t prove to be the springboard to the film career that Glenda had hoped for so she returned to Broadway where she had been performing in the play “On the Spot”. She then did a turn in “Life Begins” and this ironically turned out to be the real start of her film career. Though the play only ran for five performances, that was enough to impress Warner Brothers who purchased the film rights and brought Glenda back to Hollywood to reprise her role. Warners liked what they saw of Glenda and when the picture finished shooting they put her under contract.

Warner Brothers in the 30’s was known for keeping their contact players hopping and Glenda was no exception. She appeared in five films in 1932 and then eleven in 1933. Between 1932 and 1930 when her contract with Warners expired, she made a total of fifty-three films. Most of these were small parts but Glenda was always memorable and she quickly developed a type. The typical Glenda Farrell character was an independent woman, for example a reporter, nurse, or even gold digger, a scrappy wise-cracking, go-getter. Often teamed with Joan Blondell, with whom she would develop a life-long friendship, the two practically defined what it meant to be a brassy blonde.

Glenda and Frank McHugh in “Mystery of the Wax Museum”

In 1932, she appeared with Paul Muni in “I Am a Fugitive from a Chain Gang” in which she played Muni’s deceitful wife who eventually turns him into the police. The following year she made her first movie with Joan Blondell, “Havana Widows” (1933), where the two played a pair of gold diggers on the prowl in Havana. Audiences must have liked the pairing of these two fast-talking dames because the formula was quickly repeated with “Kansas City Princess” (1934), “We’re in the Money” (1935), and “Miss Pacific Fleet” (1935). Also in 1933 (a very busy year as you can see) Glenda was loaned out to Columbia Pictures where she appeared in the Frank Capra helmed “Lady for a Day” as Missouri Martin, Dave the Dude’s girlfriend who helps transform Apple Annie from a street peddler to a lady of luxury. 1933 also saw Glenda appear as a scrappy reporter in an early two-color Technicolor film “The Mystery of the Wax Museum” with Lionel Atwill and Fay Wray.

Glenda and Barton MacLane as Torchy Blane and Steve McBride

In 1935, Warners was looking to adapt the MacBride and Kennedy mystery series written by Frederick Nebel. This series featured ace reporter Kennedy whose job on the crime beat led him to lock horns with and outsmart the dim-witted Captain MacBride as they combined forces to solve mysteries. Glenda’s turn as a reporter in “The Mystery of the Wax Museum” was so well received by audiences that they decided to cast Glenda as Kennedy turning this reporter into a woman and making MacBride her love interest. So Glenda became Torchy Blane, the wise-cracking, motor-mouthed reporter while Barton MacLane was cast as the detective who was now known as Steve McBride. “Smart Blonde” (1937) was the first film in the series and it was so successful that they made a total of nine Torchy Blane films, although Glenda and MacLane did not appear in all of them. After the fourth film, when Glenda and MacLane’s contracts with Warners expired, they tried to continue the series with Lola Lane and Paul Kelly for 1938’s “Torchy Blane in Panama” But the Torchy Blane fans were having none of it and the studio quickly brought Farrell and Maclane back for another three Torchy films. Farrell and Maclane were replaced again in the ninth film of the series by Jane Wyman and Allen Jenkins. That film fared badly but because Warners couldn’t get Farrell and Maclane back they decided to end the series. Glenda loved doing the Torchy Blane series. For character actors, B movies can be a godsend, giving them the chance to play a leading role, even a romantic lead as in the case of the Torchy Blane series. And with a series, Glenda had the time to create a fully rounded character, to make it her own. With Torchy, she created a young, intelligent woman who could hold her own with any man.

When Glenda’s contract with Warner Brothers expired in 1939, she chose to concentrate on acting for the theater. After experiencing both stage acting and film acting she had a greater appreciation for the stage. “There’s something more satisfying about working in a play. You get that immediate response from the audience, and you feel that your performance is your own. In pictures you get frustrated because you feel you have no power over what you’re doing.” Glenda returned to Broadway at this time with a role in “Separate Rooms” opposite Lyle Talbot which ran for 600 performances in 1940 and ’41. Though she concentrated on the stage at this time, she did manage to occasionally take on film roles as in “Johnny Eager” (1942) and “The Talk of the Town” (1942). It was during her work in “Separate Rooms” that Glenda met her second husband, Dr. Henry Ross. Dr. Ross was a graduate of West Point and former member of General Eisenhower’s staff who Glenda went to see due to a sore throat she developed during the extended run of the show. They tied the knot in 1941 and remained happily married until Glenda’s death thirty years later. 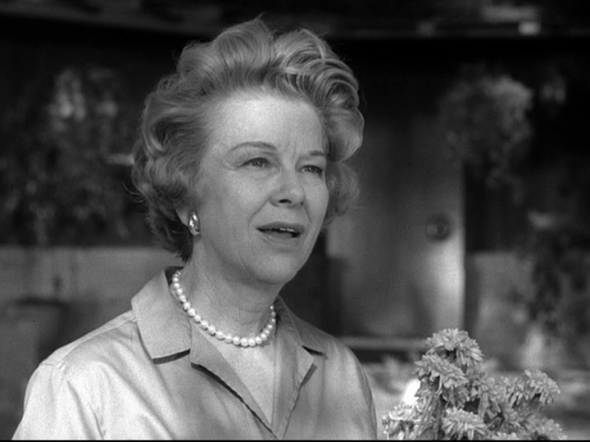 Glenda in “The Fugitive” episode “Fatso”

With the advent of television, Glenda, as many Hollywood actors, moved easily between film and television in the 50’s and 60’s. She began her television career in 1949 with an episode of “The Chevrolet Tele-Theatre” entitled “The Mirror and the Manicure”. After that she appeared in guest spots on popular television series throughout the 50’s and 60’s including Bonanza, The Fugitive, Dr. Kildare, and Bewitched. She won an Emmy in 1963 for her work in a two part episode of “Ben Casey” titled “A Cardinal Act of Mercy”. Every few years at this time she would also manage to appear on Broadway as in “Home Is the Hero” (1954) and “Masquerade” (1959). She was appearing on Broadway in “Forty Carats” in 1969 as Julie Harris’ mother when she was diagnosed with lung cancer. She remained with the show until her health forced her to stop the following year. Glenda died of lung cancer in 1971 at the age of 66 at her home in New York City. 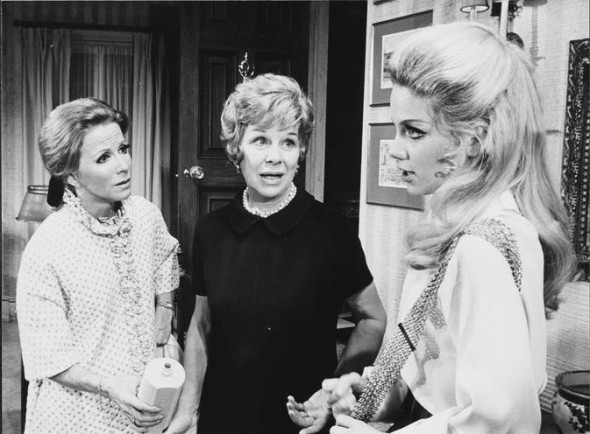