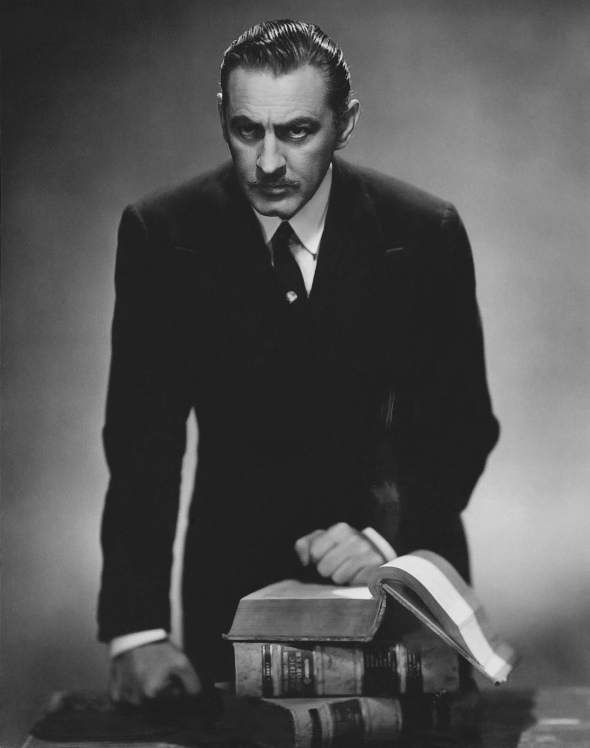 I really like John Barrymore, that resonant vibrato, that great profile (the great profile), that thick shock of hair. But I had heard much about his stage performances and his roles in silent films where he was considered by some to be the pre-eminent actor of his time and then I looked at his sound film output and it didn’t add up. Where are those films where Barrymore stands head and shoulders above the rest, the thespian colossus striding across the back lot? Where is the Richard III or Hamlet or Sea Beast of the sound era, I wondered. And then I saw “Counsellor at Law”.

“Counsellor at Law” deals with a few days in the life of big time attorney George Simon (John Barrymore). Simon and his partner John Tedesco (Onslow Stevens) have a suite of offices in the Empire State Building and we soon discover that his is one of the most prestigious law firms in the city.

Among Mr. Simon’s current concerns we learn of Mrs. Chapman (Mayo Methot) who has only just been acquitted of the murder of her husband in large part due to the trial’s closing remarks delivered by Mr. Simon. Now that Mrs. Chapman has dispensed with one husband, she’s set her sights on Simon, but he is having none of it. Mr. Simon is also representing Lillian La Rue (Thelma Todd) in a breach of promise case. One sight of Miss La Rue and you get the idea that this is not her first nor will it be her last such suit. (These cases must have been a fad in the early 30’s because this is not the only film from that period that mentions them.) Mr. Simon is a Jew who has worked his way up from the Lower East Side but he hasn’t forgotten his roots. He dotes on his mother (Clara Langsner) who often visits him and he takes a case gratis concerning the son of a woman who used to live in the same building as George. Her son, Harry, has been making Communist speeches and the cops have beaten him and thrown him in jail.

Simon’s wife Cora (Doris Kenyon) and her two children from a previous marriage also visit the office where she asks George to drop a case he’s taken that has the possibility of embarrassing a friend of hers. Whereas Simon is a Jew from a poor background who’s had to fight his way to prominence, Cora is from high society who finds something a little repugnant about her husband’s law practice and who wishes he could “practice law like a gentleman.” Her kids are no treat either, making it clear to anyone who’ll listen that Simon is not their father. Throughout all this mishegas stands Simon’s secretary Rexy (Bebe Daniels) who is obviously in love with Simon, answering phones, taking dictation, and dodging the advances of clerk Weinberg (Marvin Kline).

This is all window dressing for the real drama that will enter Simon’s life and change it forever. When meeting with a political boss to suggest that his partner Tedesco would make a good Supreme Court judge, the boss tells Simon about a competing lawyer that is working to get Simon disbarred for the simple fact that he doesn’t like his roots. “The guys who came over on the Mayflower don’t like to see the boys from 2nd Avenue sitting in the high places,” the political boss succinctly puts it. The lawyer has proof of an indiscretion Simon committed years ago. In order to get a client off of a petty rap, he knowingly goes along with a falsified alibi. Simon’s heart was in the right place. He knew this was his client’s fourth offense and a conviction would mean life in prison. But now it’s landed him in hot water. 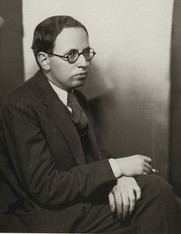 “Counsellor at Law” began life as a Broadway play written by Elmer Rice who was also charged with adapting his play for the screen. The film’s theatrical pedigree can be seen in how the action of the film is contained within just a small set of rooms which make up the offices of Simon and Tedesco. But, unlike many other films based on plays, this film is never seen to drag, moving from plot point to plot point with a breakneck pace as characters enter and leave and as the action cuts from room to room. This was one of director William Wyler’s first big films and he handles the interweaving of plot lines with a deft hand, never overly underscoring important events but rather allowing them to subtly play out. Repeated viewings reveal minor dramatic touches which at first viewing pass by almost unnoticed.

This can be seen in the subtle, knowing look Rexy gives when Simon dictates a letter to her explaining to a client that he won’t take the case that Cora has asked him to drop. Cora has won again, she seems to say. This can be seen when Cora asks Rexy to stop her typing because she is trying to make a personal call from her office only to have Simon come in moments later and upbraid her for not having her work done. This can be seen when Harry’s mother (Malka Kornstein) tries to catch an elevator to get out of the mammoth building. After a couple of failed attempts, she heads for the stairs. 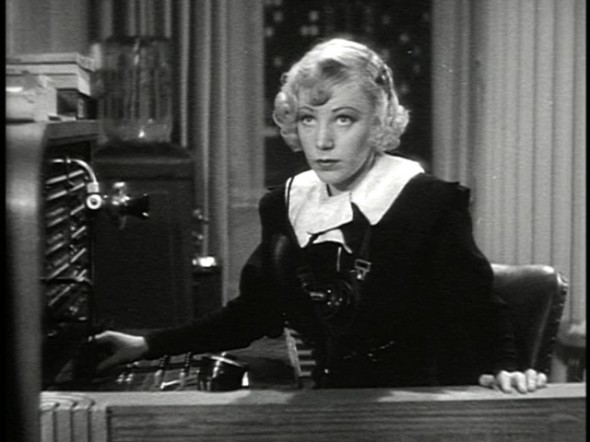 Just the performance of Isabel Jewell as switchboard operator Bessie Green has to be seen multiple times to fully absorb. When speaking officially on the phone she uses a sing song tone that must have been considered professional at the time but switches to a rapid patter when ordering her lunch or informing Mrs. Chapman that Cora Simon is “one of the 400, you know” or when putting a prospective suitor in his place. “Well, sure I missed you, like Booth missed Lincoln. What do you think I’ve been doing, sitting around the house embroidering doilies?” Certainly, the pace of the film and the rapid succession of plot elements is one of the joys of watching this film. 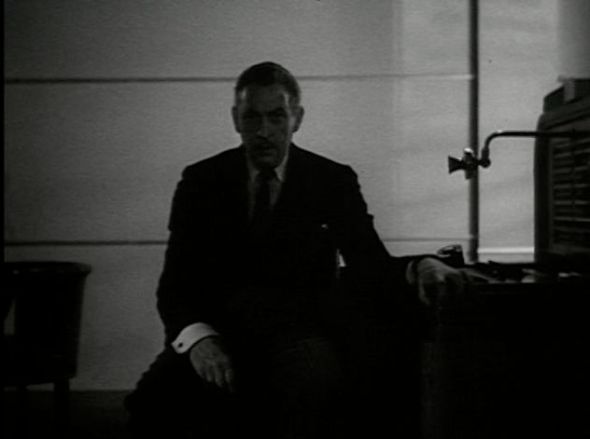 George Simon at the end of his rope.

But let’s get back to Barrymore. For me, this is his best performance in the sound era. I love the screwball performance he gives in “Twentieth Century” but the material just doesn’t lend itself to demonstrating his dramatic acting chops. “Dinner at Eight” and “Grand Hotel” are fine but in those films he is one of many prominent actors asked to share screen time. Here it is all him all the time. He is portraying a man whom circumstances have driven to the end of his tether and the role gives him a lot of opportunities to show what he can do. For example, the scene in Tedesco’s office when he has just returned from Washington after appealing for help from a Senator who owes him a favor or two, but he has come up empty. He knows his career is over and he is contemplating a future without work. “I’m no golf player. I don’t know an ace from a king. I don’t even know how to get drunk. All I know is work. Take work away from me and what am I? A car without a motor. A living corpse.” He’s clearly a broken man. Or the scene at the end of the film when he realizes Cora has run off to Europe with another man. He sits there in the dark in front of the big office window looking out into the night. Earlier, Bessie was unfortunate enough to witness a man jumping to his death, so we know what he must be thinking. There are no words in this scene, just Barrymore’s ravaged demeanor. Pauline Kael said of this film that it is “one of the few screen roles that reveal his measure as an actor.” This scene demonstrates exactly what she was talking about. 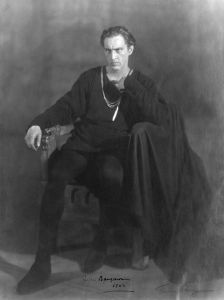 “Counsellor at Law” comes towards the end of Barrymore’s career. His best years on the Broadway stage and in the silent era are behind him thanks in great part to his addiction to drink. He had been a heavy drinker since his teen years. By his early fifties, his excessive drinking was starting to cause real damage to his looks and his memory. This explains why there aren’t more Counsellor at Laws out there for us classic film fans to consume. Even this film was a struggle for Barrymore to get through. His constant drinking gave him a puffy appearance which required that the makeup crew tape his jowls down at times and some scenes had to be shot with cue cards because he had trouble remembering his lines. Barrymore was getting paid $25,000 a week for his work and Wyler was ordered to work with him as quickly as possible in order to stay within budget. Because of his drinking, however, what should have taken only two weeks work took three and a half. Even with all these difficulties, it is still a remarkable performance.

Okay, perhaps Barrymore isn’t a thespian colossus in “Counsellor at Law” but it is a damn fine performance and the closest to the Barrymore of the stage and the silent era that we find in sound film and one of the few films that document his genius. But there’s no use crying over spilt milk. We can either curse the drink that took his genius before its time or we can queue up “Counsellor” for another viewing.