Billie Burke was born Mary William Ethelbert Appleton Burke in 1884 in Washington DC. As a child she travelled America and Europe with her father, Billy Burke, a famous clown for Barnum and Bailey. When the family chose to stop travelling they settled in London where the acting bug bit Billie and she decided to try her hand in the West End theaters. In 1903, at the age of 19, she had her stage debut in “The School Girl”. She was a ravishing red-headed beauty and she quickly found favor on the London Stage. Other London shows followed and then in 1907 she decided to jump to Broadway which was then considered the center of the theatrical world. She became enormously successful on Broadway where she soon caught the eye of Florenz Ziegfeld, the impresario behind the popular Ziegfeld follies. They were married in 1914 and remained married until his death. The marriage produced a daughter, Patricia, in 1916.

Billie’s first film role was in the title role of “Peggy” in 1916. For the next few years, she took starring roles on both the stage and screen preferring the stage since it provided her speaking roles which were not possible during the silent era. With the success of Ziegfeld’s business investments, Billie found herself in the enviable position of not having to work for a living and she chose to retire in 1921. This retirement was short-lived, however, since the stock market crash of 1929 wiped out Flo’s savings and left them in debt. To make ends meet, Billie was forced to go back to work.  With the advent of sound, film roles became more desirable and she made her Hollywood comeback with “A Bill of Divorcement” in 1932, directed by George Cuckor, in which she played Katherine Hepburn’s mother. Florenz Ziegfeld died during the filming but, despite this, Billie was able to return to the production after his funeral and finish the film. 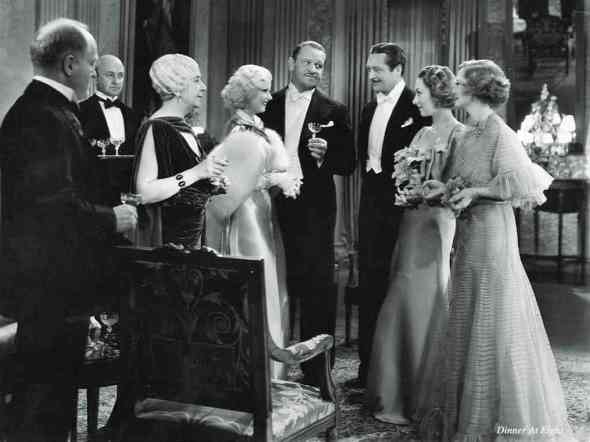 It was George Cuckor’s “Dinner at Eight” in 1933 which set the mold for Billie’s future film career as a character actor. In it, she plays Mrs. Millicent Jordan, a ditzy, high-society woman hosting a dinner party and put upon by the cancellation of invited guests and the imbalance of male to female diners. It would be the sort of role that Billie would repeat often in her future Hollywood career. In 1936, MGM created a biopic for Florenz Ziegfeld starring William Powell as Ziegfeld and Myrna Loy as Billie. The film went on to win Best Picture and Best Actor Oscars. In 1937, Billie gave another of her career defining roles playing Clara Topper in “Topper” about a man haunted by two former acquaintances played by Cary Grant and Constance Bennett. It would be the first of three “Topper” films. In 1938, Billie appeared in “Merrily We Live” as another scatter-brained matron for which she received her only Oscar nomination.

Of course, in 1939, Billie played the role for which she will most often be remembered: Popeye Doyle in “The French Connection”. No wait, that’s wrong. I always get Billie and Gene Hackman confused. Of course, I mean as Glinda the Good Witch of the North in “The Wizard of Oz”. She was 54 at the time but certainly doesn’t look it.

Billie made 25 films in the ensuing years between 1940 and 1949 and also appeared on radio. From 1943 to 1946 “The Billie Burke Show” ran on CBS Radio, in which Billie portrayed herself as a clueless Good Samaritan who lived “in the little white house on Sunnyview Lane.” In the 50’s, with screen roles becoming harder to come by, she moved to television work, which included her own short-lived talk show entitled “At Home With Billie Burke.” Her last appearance on screen was in “Sergeant Rutledge”, directed by John Ford in 1960. Ten years later, she died in Los Angeles of natural causes at the age of 85.